A small dining spot called The Feast had wonderful reviews, so we were a little surprised to find it located in a strip mall. There were a few outside tables, but we chose to eat inside as the open air view was of the parking lot.  Local artwork on the walls was available for purchase and many of them were of local establishments on the water.

The menu was quite extensive.  I decided on a Fried Green Tomato BLT on a croissant with onion rings and baked beans.  It was marvelous!  I love fried green tomatoes, but have never had them on a BLT before.  The bacon was crisp and it had a sauce with a little kick.  Having it all on a croissant was an added feature.  The onion rings were crunchy and delicious, but I have to mention the baked beans.  They were the tastiest I have ever eaten!  They were several types of beans, almost like Creole beans, but whatever they did to them gave them such tempting 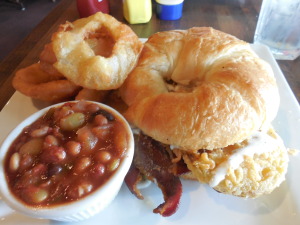 flavor.  I would return to The Feast for the beans, alone.  Barb ordered a burger, fries, and coleslaw which she said were wonderful, too.  True Nosh or Truly Nauseous?  A true nosh.