My friend and I took a drive to Green Bay to check out Nakashima of Japan for Restaurant Week.  We both chose to go with their hibachi dinner rather than the sushi dinner option.  The price was the same for each at thirty dollars. We sat at a table with four other patrons with one side available for the chef to work his magic.

We began with Japanese clear soup.  I didn’t have a very high expectation for it.  I usually am not fond of broth.  However, this soup had wonderful flavor.  I was pleasantly surprised.  Next appeared a small lettuce salad with just lettuce, but the dressing had a bite to it that I enjoyed. The chef then delivered the flaming shrimp appetizer.  Yum!  We also were given our choice of three sushi rolls and I chose the Boston roll, which had tuna and avocado.  You can see we were not going to leave this place hungry,

For the entrée, I ordered a combo of filet mignon and shrimp, which came with hibachi vegetables and rice.  Everything was rich and full of deep flavor.  The chef made jokes as he threw items up in the air.  He was a delight to watch.  We also had some oolong tea.

My dining companion and I ordered everything the same and agreed that it is definitely a place we plan to return.  Green Bay Restaurant Week is a good idea for people to get out and try places they may not have before.  We both left with a doggie bag, too. 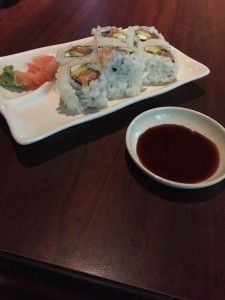