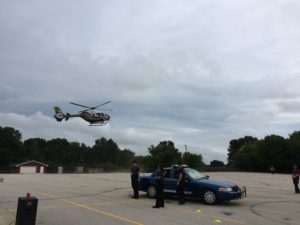 Hundreds of crime/mystery writers swamped Green Bay August 11-14 for the eighth annual Writers’ Police Academy. They came from all over the United States and other countries. One author came from Bangkok. I almost feel guilty that I only had to drive thirty miles. Almost.

On Friday morning, the Eagle III rescue helicopter appeared to transport the injured from an accident simulation. We were able to see how EMS react to a deadly collision. 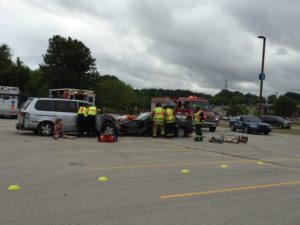 We viewed a “deceased” person on the hood of a car and live bodies pulled out after the jaws of life was employed.

On Saturday morning as we were in the lecture hall for announcements, we heard someone screaming for assistance. He had been stabbed and soon other people were also attacked. We were in the middle of a simulated mass assault. Luckily there was a rescue after police were called. They came in with guns and had us keep our hands locked on our heads for what seemed like a long time. They needed to make sure the perpetrator was not posing as one of us. Even though I knew it wasn’t real, my heart pounded harder and it was interesting to understand what is done in that situation.

The entire conference was a learning experience as I attended many sessions, but there wasn’t enough time to do all that I would have liked. Maybe next year? I bet they’ll have new classes that I’ll want to attend, so I’ll probably never get to them all. Not a bad problem to have.

After all of the stress and excitement, I took a break at the casino in the Radisson before the banquet Saturday night. The keynote speaker was author Tami Hoag. She was entertaining and I laughed out loud at her stories.

What a wonderful experience at Writers’ Police Academy 2016! 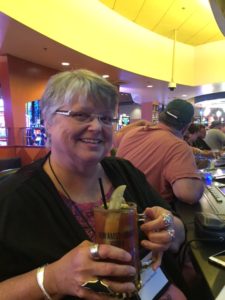 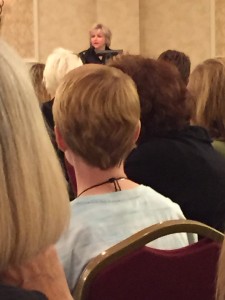 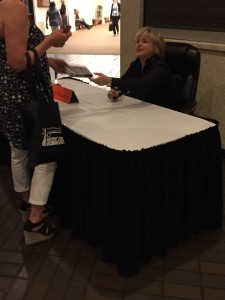 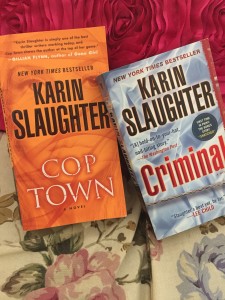 One of the highlights of the Writers’ Police Academy was the banquet where the guest speaker was Karin Slaughter.  I’ve read many of Karin’s books which are gritty crime fiction.  Her speech was hilarious as she based it on her family and growing up in the South.  If I didn’t enjoy her books so much, I’d suggest she had a future as a comedian.  I’d go to see her again in a heartbeat.  I’ve included pictures of her speaking, signing books right after I had mine signed, and the books I purchased.  I couldn’t put  Cop Town down when I returned home and finished it in short order.

Last weekend I attended the Writers’ Police Academy in Appleton, Wisconsin.  Previously it had been held in North Carolina, but attendance has outgrown the facility there.  The new Police Academy in Appleton was perfect.  Participants stayed at the Paper Valley Hotel in downtown and were bussed across town to the facility.  Sessions went from late afternoon on Thursday through Sunday at noon.  We were busy all the time.  This was not a writers’ conference.  No tips were offered about the craft of writing like other gatherings I’ve attended in the past.  Real police officers, coroners, forensic experts, ATF and former FBI agents were sharing what really happens at a crime scene and beyond. Enlightening! I’m hoping to attend next year, too.

Here are a few pictures of some of the events.  I went on a tour of the jail, but we were not allowed to bring in our cameras or phones. 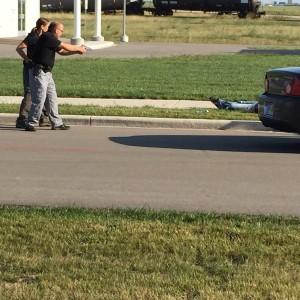 We witnessed a car chase and shooting, a well-trained police dog, and a plane where students learned about the tactics for handling an unruly passenger.  I’m not sure that you can see it, but the name above the gas pumps by the plane is Spill and Rob. All the instructors had a great sense of humor.  Fantastic weekend! 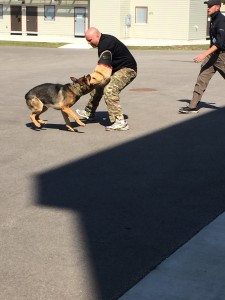 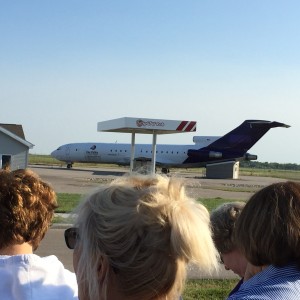